I loved my Mum like all children often love their Mum. It was probably thanks to her that I was meeting new people and making new friends, maybe it was because she was open and sociable, she was nevertheless very authoritative, speaking only Norwegian to us. When she came to fetch us at school, we had to tell her about our day in Norwegian, if not, she wouldn’t listen. The ‘switch’ from one linguistic world to the other was tough, and when my brothers, sister and I played together (without being with Mum and Dad) we often spoke French, Italian, sometimes English or Norwegian among us, depending on what we were doing. Mum and Dad had decided to have one ‘family’ language, and that was Norwegian, but school, friends, everything around us every day was in French.

When we had guests at home, we all spoke French with French speakers, English with English speakers, Italian with Italian speakers, and we had to adapt to the other person’s language. It was just the way it was.

It had been the same for Mum and Dad when they were small and for a lot of other people as well.

Mum grew up on the south-east coast of Norway, in a little town called Toensberg, until the age of 12. She then moved with her mother and brother to London, England, to stay with her father who was working there at the time.

On Saturdays, she often made the Norwegian ‘groet’ (porridge) for us. Fortunately it was not every week, but her Norwegian waffles, her English scones, muffins and cakes, and the Christmas Pud for Christmas, were so good. She also made wonderful Italian pasta, especially appreciated by Dad who really needed the real Roman taste of good tomato sauce and ‘al dente’ consistency. We also had French dishes, salads, fresh vegetables and fruit from the market, quiches, yoghurts and tartes. Every day, at home, there was like a firework of various dishes from various countries, made by Mum.

I was not cooking with her, because I was so much into music, school work, dolls, friends and the tape recorder (my sister was the one who was learning to cook).

Having moved from the Norwegian woods to an English big city, Mum knew what it meant to move to a country with a different language, for a child. She subscribed to an Italian and to a Norwegian weekly comic strip magazine, for us to emotionally and physically be in contact with (and maybe learn more) Italian and Norwegian. We all loved them. Every week we shared and read the magazines. Reading Italian comic strips was bringing us to our past life in Italy and I was remembering so many things in Rome from the pictures. Reading Norwegian was projecting us into a future life, in which Mum was saying that we were going to live in Norway, one day.

To make me know more about Norway, where we had never lived but had been a few times to visit some family, Mum helped me to put an announcement into the Norwegian comic-strip magazine. We wrote that I was looking for a Norwegian child my age to become my pen-friend. In the next weeks arrived hundreds of letters every day from children all around Norway, from up North to the West and South.

I then learned from Mum that I had to give the postman a present, because the hundreds of letters were very heavy for him to carry on his bicycle. Mum also taught me to gently answer most of them and to choose just a few. In that way, I was learning to read and write Norwegian (speaking with Mum). I received photographs of children in Norway, of cities and houses, of children on holiday in Spain or on the Canary islands, understanding that Norway was very dark in the winter. I learned that there were many dialects, two main official languages, that children could use color pens at school (unthinkable at my school in Paris), that absolutely almost everybody was ice skating and skiing, and that school magically finished very early in the afternoon ! It was another parallel world that was existing far away from my every day life.

I was happy, with my tape recorder, recording myself to improve my French poetry reading in class, to remember difficult words, to listen several times to sounds of music and of the birds singing. I was learning to read, speak and write in Norwegian with Mum, corresponding with the children in Norway. I was also learning music, at the music school and in my room. Music was my time to be alone, far from all the effort I was deploying to speak languages. It was the way I could get out my feelings alone, without having to choose one of the languages. I learned later that we always use all our languages when we speak one. The luggage being heavier takes more time and effort.

I was also singing English and Italian songs with my Dad, and recording some of them on the tape recorder, which was connecting my school and social life with my life at home.

I was happy with all these things, but a little black cloud was starting to appear… Mum (and my little sister) didn’t like the weather in Paris. They were suffering from the humidity, the air, often having colds and coughing. She was very busy with the 4 of us, who were going to French schools, friends were coming more and more home, and she was busy listening to the joys and problems of our lives in a society that she didn’t know so much about herself. She was saying that we would soon go to Norway, ‘our’ country.

At almost 9, I was listening to what she was saying, but I was not really think about it.

Norway was after all the country of her childhood, it was in a way also my country.

The more I was learning French, the more I was hearing that my voice was becoming more like the other childrens’, the more I seemed to start to anchor myself here, in Paris, in this new house, among my new friends. The tape recorder was a mirror, a bridge between my life at home and outside home.

Even if Italy was still in my heart and was <my> country, at the same time I was feeling more and more at home here in France. I was missing so much our Italian nanny who was with us in Rome, Pina, as well as my friends there, the laughter, the screams, the sounds and smells of laundry and of the dry earth, the old houses and ruins, the sunshine…. But I was asking less and less my parents when we would go back to Italy. My languages were somehow staying and developing inside me, becoming bridges to the various parts of my life. 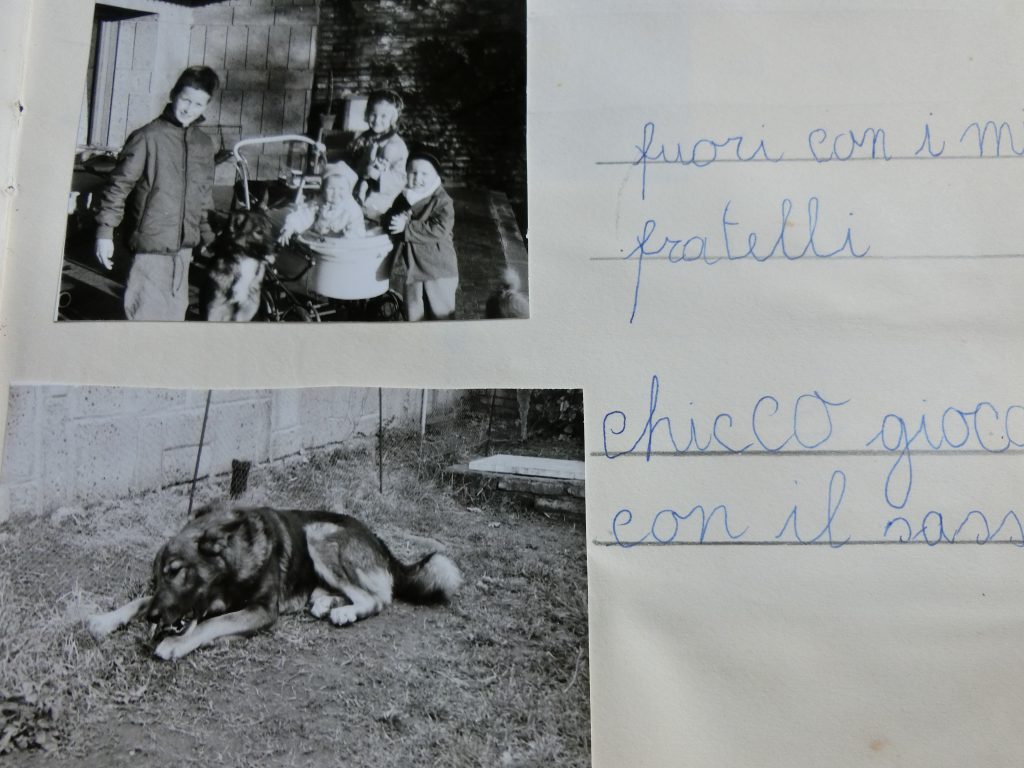 My brothers and sisters and our dog 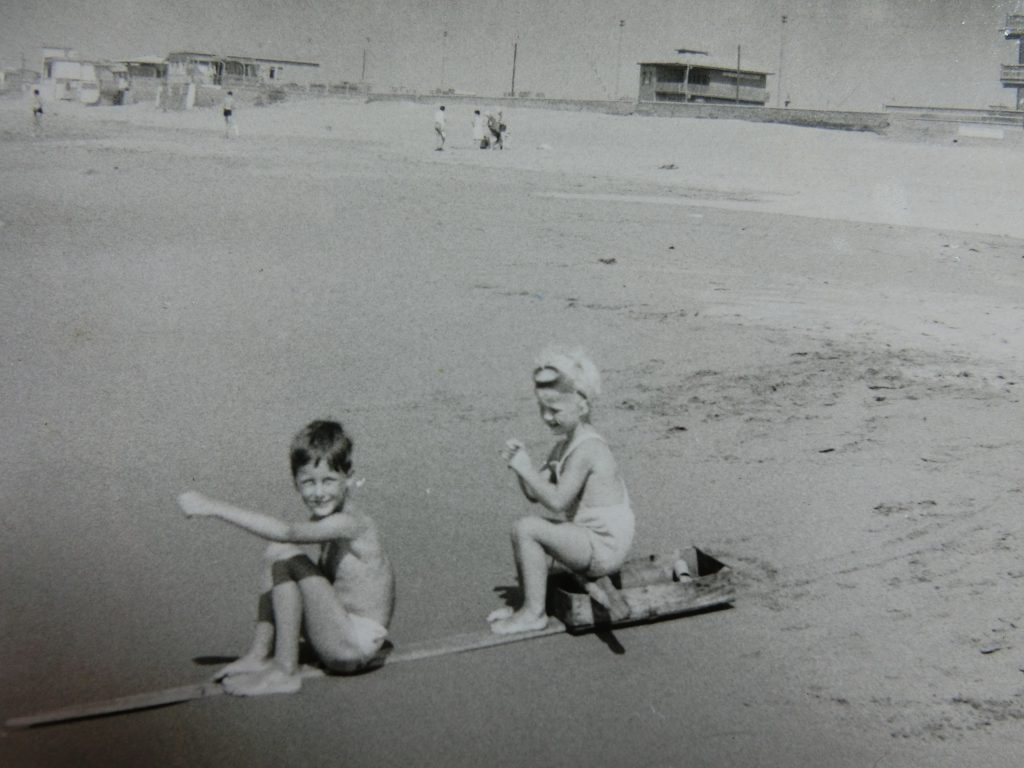 My elder brother and me playing on the beach near Rome