I was now in a new school run by gentle nuns, like when I was in Rome. When I tried to speak French, I was using Italian words, hoping that people would understand a little of what I was trying to say. One day, a little girl in the class showed me how to pronounce the French ‘r’. Her name was Frances and her parents were from England. We both knew English but we spoke French together because all the other children and the teachers were doing so. I found it funny that her name meant ‘from France’ and that her Mum pronounced it in the English way, whereas everybody at school was saying it with the French ‘r’, the nose sound ‘an’ and a longer open ‘e’ at the end. My name Beatrix was already French, I was told, with a long ‘i’ before the x. We all wore a navy blue and white uniform. Our teacher had a black tunic and a black and white veil. I could see some of her grey hair under it. Her skin was yellowish, she had a lot of wrinkles, wore thick glasses and her name was Madame Lavalérie.

At school, Frances, a girl called Valérie and I played and laughed a lot together. Other children often laughed with us. This laughter was making us come closer together and seemed to be a little key to open the door to new friends. Valérie was sitting next to me in class, so free, she said what she wanted, answered grown-ups as if she was older and I got a feeling that this was the way to be, in France. She made me do foolish things called ‘bêtises’, which I learned from her meant ‘stupid things that children say or do’. She also showed me her beautiful collection of perfume miniature bottles, so amazing that I was shivering, absolutely fascinated by it. Valérie, had almost the same name as Madame Lavalérie and there was Frances: their names became linked to each other in my head, like fairy lights.

In class, I often asked questions and when I made mistakes the other children laughed and Madame Lavalérie corrected me. In that way, I was getting attention and started, in my own way, to become little by little more confident and more comfortable in the new language.

One morning Madame Lavalérie asked me to go to write an exercise on the black board. The other children laughed when I walked to the front of the class. I didn’t understand how to solve the problem and started to make funny faces in front of the roaring children, making Madame Lavalérie very angry. She gave me a smack on the bottom and I went back to my seat, head low. The whole class had become silent. I tried not to cry. Everything went round in my head.

Another day, I was invited for the first time in France to a birthday party. I happily answered the written invitation card, with the help of Mum. It was on a Wednesday. Mum drove me to the party. There was an elevator and a long corridor. I had brought a present and was wearing a new skirt. When I rang the doorbell, I heard the childrens’ voices behind it. They opened the door, and as soon as they saw me, shouted all together :

This was the reason why they had invited me, it was because I made them laugh with my strange mistakes in my sentences. I thought sadly that it was not because they liked me. I remembered the girls that had laughed at me in the ballet class a few months earlier and deep inside, and decided not to say anything to Mum. It was my life outside of home. Inside and outside home were separated by language.

Sister Madame Lavalérie taught us about Jesus, Maria and the saints. The prayers were the same as in Rome, but in French. I started to compare the two languages, Italian and French, analyzing for example that in Italian there was ‘one sky’, but in French ‘many skies’ in the same part of the prayer. Also, in Italian, the subject is sometimes put after the verb, sometimes there is none, but in French it usually is put it before the verb. I began to love grammar, as if it was a game, and Madame Lavalérie got happy.  She maybe didn’t know that I was decomposing the two languages French and Italian.

In Italy, with my siblings and Dad

At home, I was speaking Norwegian with my parents, brothers and sister. My parents had decided to make it the family language and to keep all our languages clearly separated but actively spoken when we met someone speaking either or. With my friends, at school, homework, prayers, shopping, going somewhere had been in Italian in Rome and now, in Paris, were all in French. Norwegian was becoming a special, secret language, a system of images and sounds. Norwegian and English were my parents’ languages, and I was keeping them inside without analyzing them, but my link to friends and school was changing from Italian to French. Of course, sometimes French, English, Italian, Norwegian and other people came home to us. We then had to adapt our language to theirs. The switching languages process became a normal thing to do. Then I started to realize for the first time that Dad spoke French and Norwegian a little differently, and that he knew more words in English and in Italian. At dinner we laughed enormously of his funny jokes and stories, and Mum often said to him: ‘Don’t say silly things’ !  I found out that ‘stupid things that children say or do’ were fine to do even for grown-ups, because Dad did.

One day, Frances had to move to Iran, because of her father’s work. She abruptly left before we could say goodbye and the next weeks I was missing her laughter so much that it hurt. At the same time, I remembered Veronica’s dark eyes when I had left Rome saying goodbye to her, and I cried.

But Valérie and I continued to play together. She was not afraid of doing things differently and of taking risks. That was exactly what I was doing in my new life and with the new language. She was living not far from me, had grown up in that house and she was going to stay there, she said. I promised myself to make more friends around my new home: friends that I would never leave and who would never leave me.

More and more, I was feeling deep inside a connection to the ground I was walking on, every day. This ground was becoming important to me, as much as the language I was learning, like a balloon and a thread attached to it, and that I was holding, standing there. The songs of the birds, the sounds of the city and of the people around me, the wind blowing, my little dollhouse-tent in the garden, everything was enveloping my life, as well as all the words that were coming and going inside, outside and around me, in and out of my ears and mouth, in French.

I started belonging to this place which my new language belonged to and which little by little was starting to belong to me. 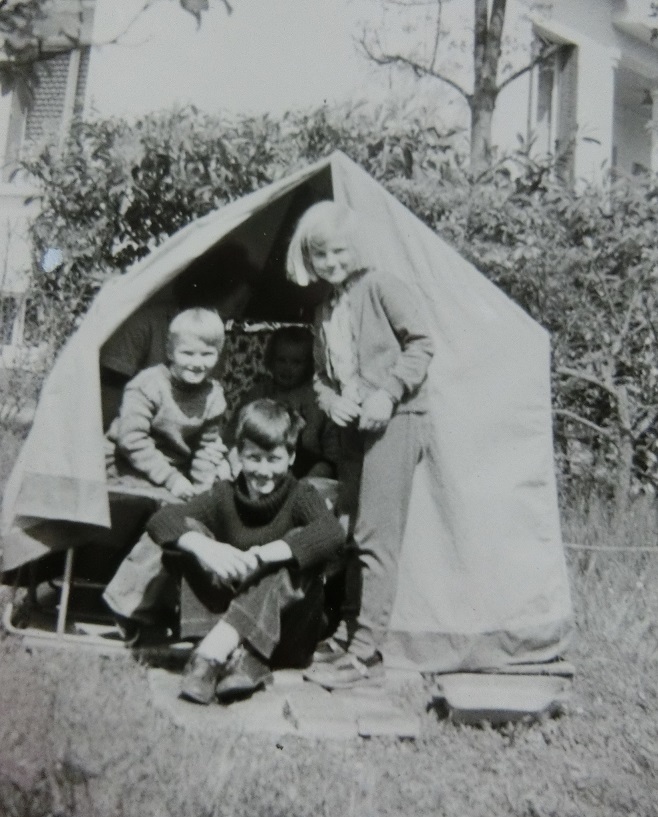 With my two brothers, in my ‘dollhouse’-tent