The schoolyard in between two big buildings was surrounded by a fence. The new school in this suburb of Paris was huge and there were children from many different countries, in all the classes. There were no sisters, no priests, but teachers clad like Mum and Dad. There were no uniforms and no aprons for the children, but they were all of different ages in the same class, like in Rome.

Flore was a little girl wearing big flower-shaped earrings made of pink and white plastic, rings on her fingers and a colorful necklace. I was fascinated by her wearing them and that her name was Flore. She looked actually like a flower, I thought. Also, it was a funny thing to imagine that the Italian word for flower <Fiore> was changed to the French <Flore> and to discover that the <i> was becoming <l>, making with great subtility a variation of the word, with an <e> at the end that was not pronounced. This <e> was like an intriguing little cushion, you could hardly hear it. It was like putting a little break to the word.
I sometimes tried to speak with Flore, but we didn’t understand each other. She shrugged her shoulders and smiled. We were trying to copy the words and sentences the teacher was writing on the board.
The alphabet was the same as in Rome, but the sounds and the order of the letters were different from what I had learnt in Italian. We were not doing much with our hands nor could I understand what was said, so I started to wait for the bell to ring, to be able to go and play with my Italian friends in the courtyard. 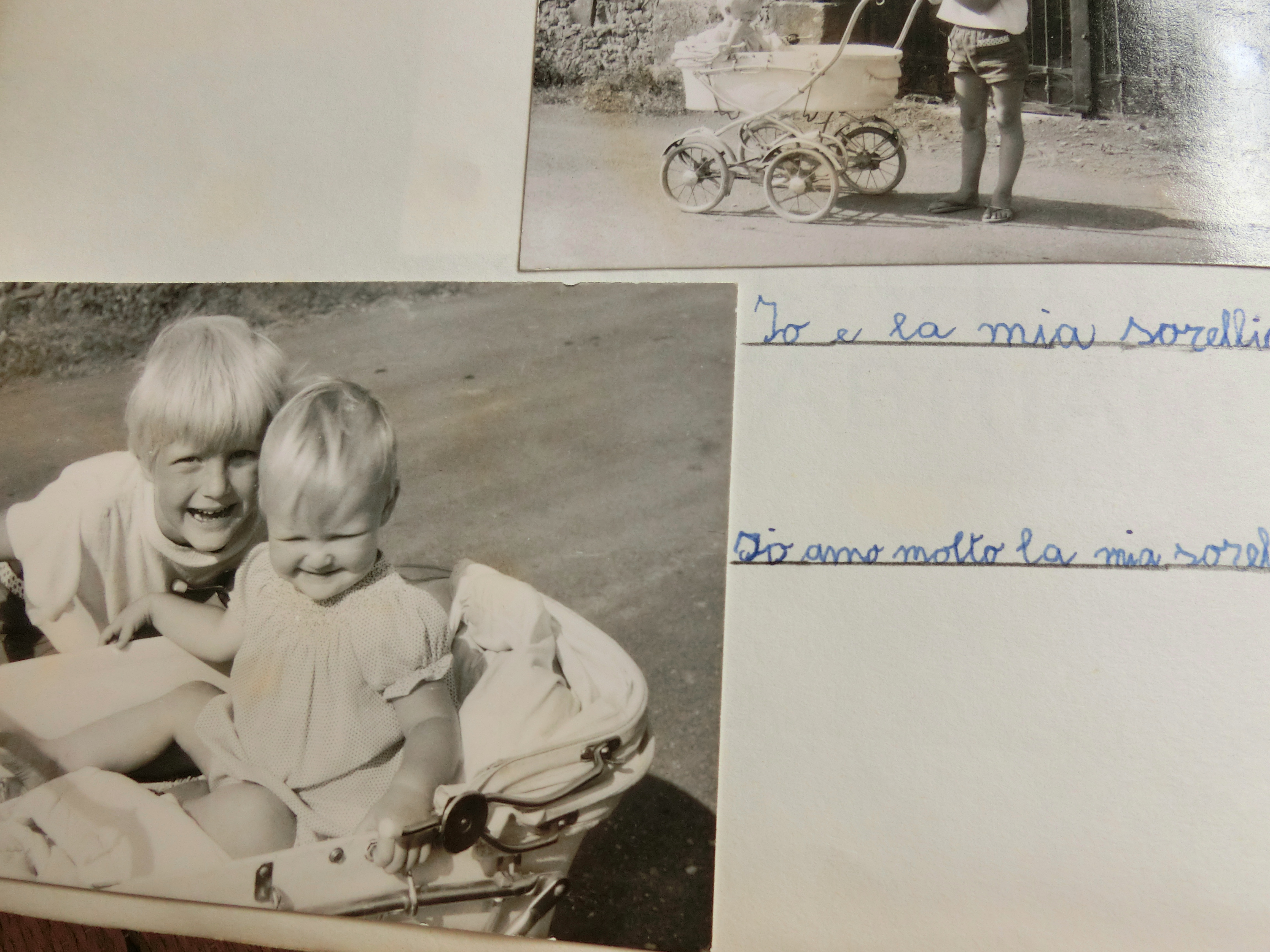 Speaking Italian here and there in the courtyard made us Italians find new friends. Soon we became a big group of Italians from all classes, playing marbles. Every morning when I went to school, I was looking forward to it, checking that I had my marbles in my schoolbag. We made holes and obstacle courses where we could, in the sandy courtyard. The marbles became the connecting element to the other children. The French names of the marbles <Agathe> (Agate) and <Oeil-de-boeuf> (Bull’s eye) became the first words in French I had to learn to translate to French to the other children who didn’t speak Italian and wanted to play with us. Starting to feel connected to all the other children through the names of the marbles and the transactions we did. My brothers and I were also doing marbles together, bringing the French language back home, next to our Norwegian, Italian and English.
Mum and Dad had decided to make Norwegian the family language, but when we met friends and family or when they came home to us, we had to immediately switch to their language. That was the rule. 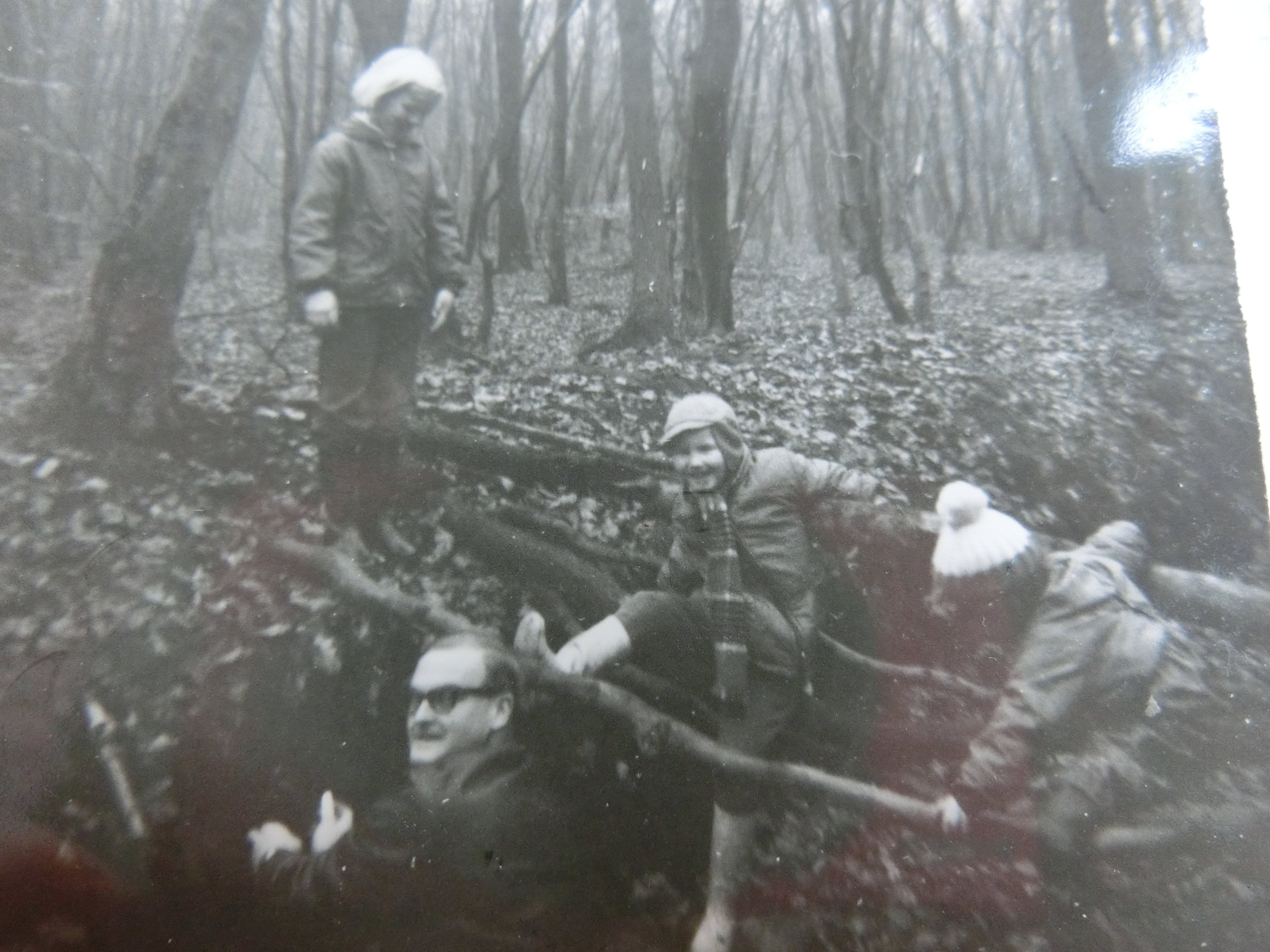 In the forest near Paris with my Dad, a brother and my sister, a few months after our arrival..

One day, Mum and Dad said that we would definitely get to know more French than them before Christmas.
My brothers and I decided to try the best we could to speak. We made it a competition between us in the first months of school and I tried what I could to understand what was said in class, but it was really difficult. When the teacher was speaking, I couldn’t help looking at the birds outside the window. When the other children did something after she had spoken, I followed and copied them.

There was another newcomer in the class, a boy called Peter. Sometimes he would stand on a little wall outside and look down at me. He was not playing marbles with us although he knew Italian and other languages. He said he was going to learn French much faster than me, because I was a girl. I told him that I didn’t care. He taught me that ‘ragazzo’ in Italian was ‘garçon’ in French (which means ‘boy’ in English) and that boys are faster to learn. I answered that this was not the case. I was 7 and started thinking that he liked me but was saying something stupid he had just learned to say from other people. It was disturbing but I felt I had to be strong and learn French even harder.

Another little girl named Maria was often alone in the class. Her face reminded me of the children in Rome, especially the ones I had played with in my grand-father’s vineyard. We were understanding each other even if we were speaking a strange variation of our different languages with a lot of gestures. One day, I asked Mum to drive her back home after school. Mum did so and we arrived at a crossing where Maria said she would get off.
I couldn’t see her house, she said she was living <là>, pointing her finger to some place over there. Mum told me afterwards that the place where she was living was not like our house.
– We are very lucky, she said, to live in a house, she said in Norwegian.
I had to be nice to her. I learned the word <slum> but I was not supposed to use this word, Mum said. I was not allowed to talk about it. My mother telling me that in Norwegian made it even a bigger secret. I remembered all the angels, the saints, Maria, Jesus and God that had been nice to many people long time ago and I started to take more care of Maria at school, giving her sweets and holding her hand. 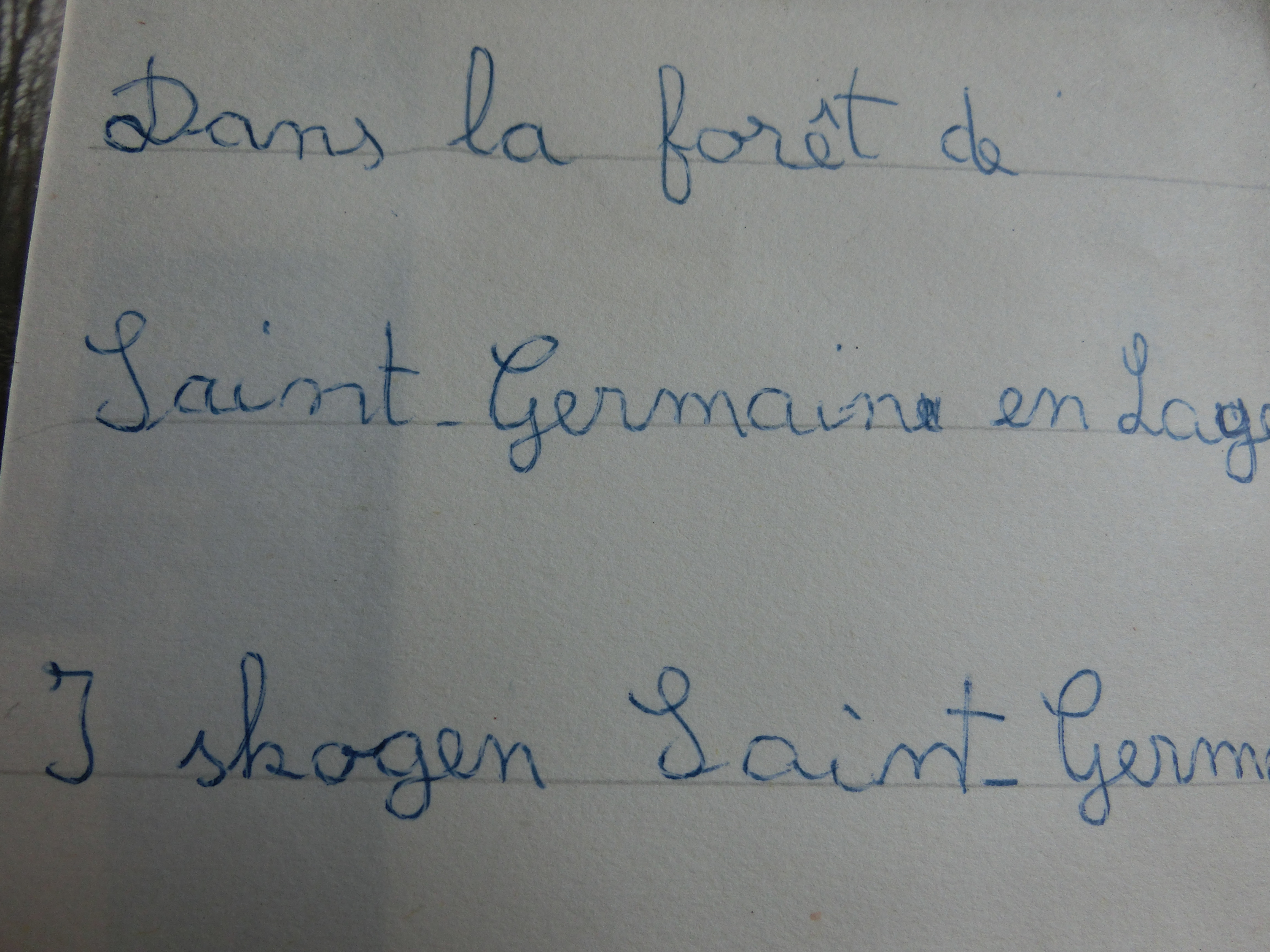 I was learning French at school and Norwegian at home with my Mum 「In the forest of Saint Germain en Laye」.

I thought that this new life was just for a while, and that I would soon go back to Rome, but I was also discovering new things, new people, new games and new places which I liked too.
A strange contradiction was rising in me: I started to love to discover new things but at the same time wanted to go back to my old friends and home.