CHAPTER I FROM ONE PLACE TO ANOTHER 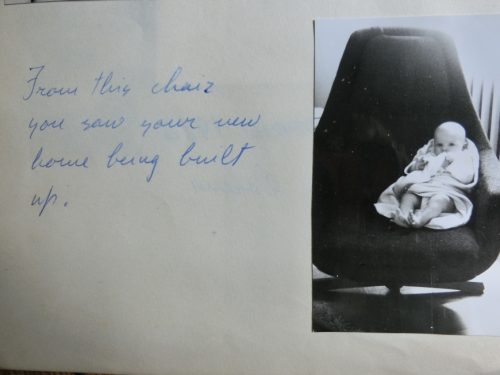 In Rome, written by my Dad:
[From this chair you saw your new home being built up]

CHAPTER I FROM ONE PLACE TO ANOTHER

I was 7 and a half and was at school in Rome. Mum and Dad had said they would come and pick us up at noon. Mum and Dad, my little brother, my little sister, the cat and the dogs would come to get us by car and the car would be full of things. My other brother and I would have to be ready, because, Mum said, we were going to move to Paris.

I felt something very special was going to happen but I was not afraid, because Mum looked happy.

I thought it would be like a long holiday, because Dad was coming, and also the dogs and even the cat…We had already moved three times in Rome but it was never that far, because I had often been back to visit my friends near our first house, and we were passing in front of our second house every time we were visiting my grand-parents on the hills outside the city.

My own little house was a tent with a door and a window. It was sometimes my dolls’ house and sometimes different places where I was acting different people, depending on whom I was playing with. 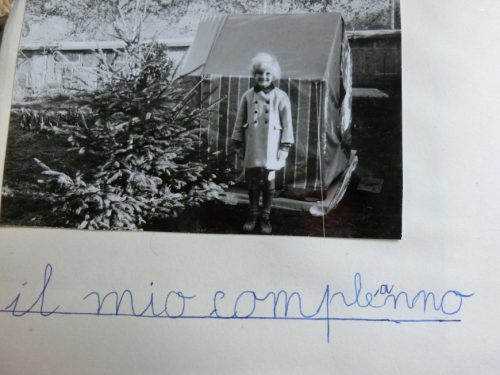 My birthday (6 yrs old, in Italian)

Mum had told me I would bring it and I was hoping that the new garden would have very few trees, because I was afraid of trees. I also hoped my new friends would not be living too far from the school, as my friends were now. I loved playing with them and I loved my teacher at school. She was always kind and smiling, and had kept a Carnival cake for me when I had been sick on that day. She was always wearing a grey tunic, and a grey and white veil around her head like the other Sisters. She was teaching me to read and to write.

I also loved the classroom I was in, and the Sienna colored building where my classroom was. Every day, I could go straight out to the courtyard and play with Massimo, Veronica, Maria and Antonio and all the other children. Massimo was often kissing me on the cheek and holding my hand and I did the same with him. 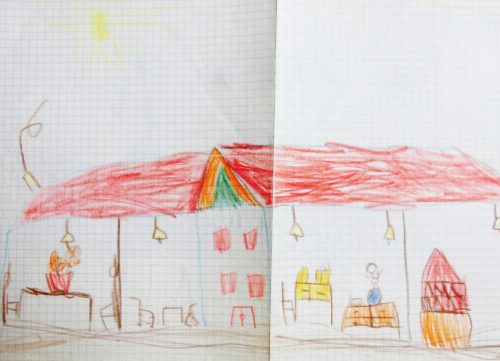 One of my drawings

I was in primary school and could read and write Italian and loved books with a lot of drawings and colors.

On that day, Mum had told me to be ready at noon. My teacher knew it and she had told the class that I was going to ‘Parigi’. She also said that I would soon come back to see everybody again and that I should have to write many letters to them.

She was helping me to take my apron off when the clock rang, kissed me and said they would all pray for us. I touched her grey veil and tried as always to catch a glimpse of her hair hidden behind.
The corridors and the courtyard filled up with children. It was lunchtime. My brother was already at the gate, surrounded by a huge crowd of friends.

When the car arrived outside the school, the grey and white clad Sisters shouted ‘Sono arrivati !’- they’re here!. 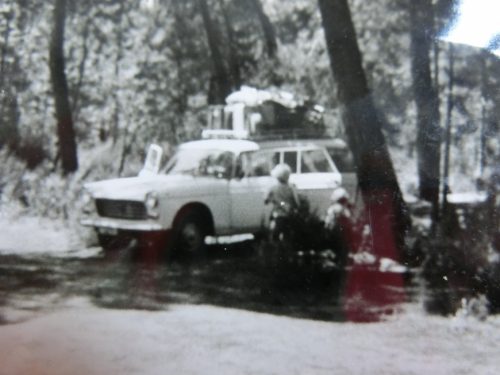 All the children around me looked at me and shouted the same, then followed my brother and I to the car. The car was packed with things from our house, my little sister was in Mum’s arms, Dad was putting an extra rope around the luggage on the roof and our brother was in the back between the dog and the cat.

Suddenly, Veronica pulled me to the side, looked me deep in the eyes and put something in my hand. It was the coin to pay her pizza for lunch. She held my fist closed holding the coin and said:
– It is for you. You will need it where you go.
Her eyes were dark and her voice was sad.

I kissed her on the cheek, held tight to the coin, answered her sadness and never forgot her words. We left Rome, waving goodbye to all the children and the Sisters standing at the gate of the school.

「Snow at home in Italy」written in Norwegian, in Rome 6 months before we left 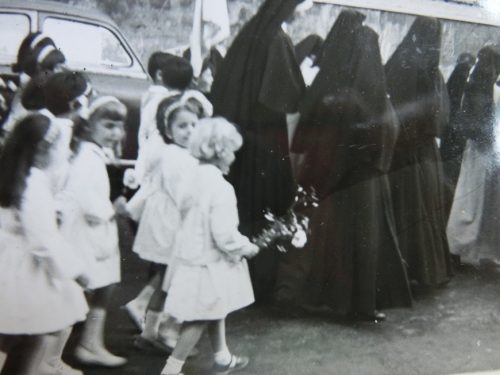 With my kindergarten in the streets of Rome

My brother and I (on the left), two Italian friends on the right, at my grandparents’ house near Rome.