The journey from Rome lasted a couple of days and we finally arrived to the little town where we were going to live. I was keeping the coin in my pocket, holding it in my hand. We are in Paris… Almost there ! said Mum and Dad to us in the back of the car.

It was raining, the sky was grey and water was pouring down the windows of the car. It was the end of the afternoon and almost dark. My brother, the one 2 years younger than me, was sitting with me on the 3rd row of seats at the back. In between us there was a suitcase and at our feet, plastic bags filled with clothes and toys. I was holding the cat and a small bag on my knees. He was laughing and looking at comic strips.

My other brother, almost 3 years older than me, was sitting in the middle row, and our little sister was next to him, she was 2, surrounded by bags and cushions to hold her up. At our feet was one of the dogs. In between them, the cat and in the front, at Mum’s feet, the other dog.

Out of the windows and through the condensation I was seeing bits and pieces of trees in clear rows along the streets, big houses behind gates, gardens surrounded by steel fences, grey-clad people walking and holding black umbrellas.

We finally arrived to our new home, a red brick house. The big black iron gate was open and down to the garage we could see a slope. There seemed to be a big garden with a lot of trees behind the house. I shivered.

Dad parked the car in front of the gate and switched off the wipers. Mum told us to stay calm and not to get out. The rain was pouring on the roof and we could hardly see anything outside.

Dad then went out of the car and ran fast towards the house, bending his back to the rain, climbing up the stairs of the front door, and disappeared inside the house. The dogs were moaning, the cat was leaning forward scratching the dog. Mum shouted to grab the cat. We could hardly hear each other because of the sound of the rain on the roof of the car, and on the street. Our sister started screaming loud.

Our first house in France

Dad came out the door and waved to us from the top of the stairs. We ran one after the other out of the car, Mum holding an umbrella over us, and went inside the house. There I stopped. The empty rooms were huge.

In each room there was a light bulb hanging from the ceiling, we looked for the switches and turned them on, one after the other.

There was a lady inside the house. She started speaking to us in a strange and soft, unknown language. I had never heard French spoken before. My parents talked to her in French too, and it was the first time I heard them speak this language. The sequence of sounds was mysterious and warm. I just looked at her without uttering a sound, just listened. She gave Dad the key of the house we were going to live in.

Hearing them speak made a kind of link inside me. Of course me too, I should do like Mum and Dad.

I was sure that I would soon be able to understand and speak this new language. 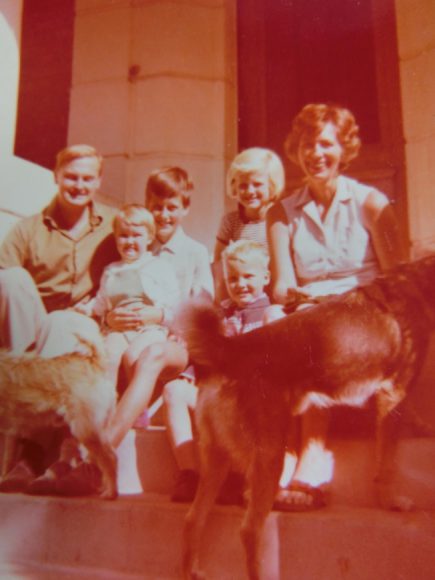 I followed my brother up the stairs, to see what was up there. On top of the stairs, there was a locked door. We both put our ears against it. Was it the rain or was it wild animals or monsters, the sounds we heard were unknown, extremely frightening. We got really scared and ran down again, our hearts beating very fast. We met our brother on the stairs between the ground floor and the first floor. He was coming up to see us, but followed us down again getting as panicked as we were. Mum was opening sandwich boxes in one of the rooms, and we sat down next to her. That evening we stayed close to her and slept next to each other on mattresses, in the same room, without visiting any other part of the house. 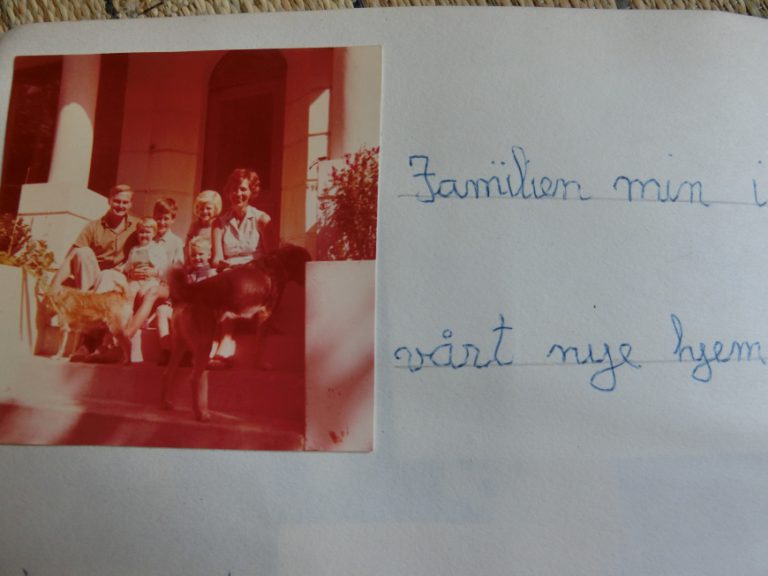 We lived in this house for one year.

I was scared of the locked attic, of the high trees of the garden, of the silent houses in the neighborhood, of the empty streets and of the locked gates, frightened by this new world where there was less sunshine, less warmth, less laughter, no stone ruins to sit on, no smell of the Sunday pasta at my grand-father’s, no vineyards where to play hide and seek, no groups of children running around together, no screams and no kisses.

These were the silent outskirts of Paris. I didn’t know then that Paris had various outskirts.

I would have to learn about this new world, I thought, but every day I was thinking of my friends in Rome, of the school, of my teacher, at the birds singing beautifully when I was sick in bed and was hearing them through the green shutters that Mum often left half open for me. I was thinking of all the love, apart from my brothers, sister, Mum and Dad, that I had gotten from so many people.

At the age of 7 and a half, discovering this new place started engraving memories inside me of my previous life in Rome. This house was soon going to become a shelter on the long winding road to the French language and to my Norwegian, Italian and English identity. 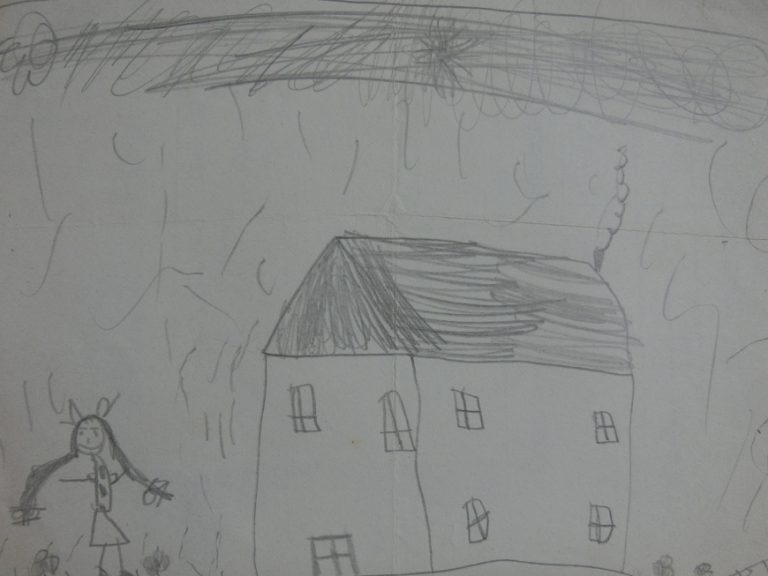 A drawing of mine